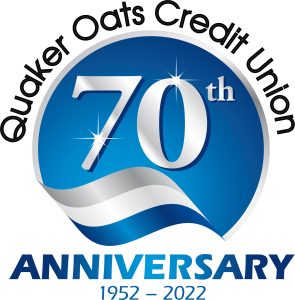 The meeting was called to order by Chairperson Ken Owens at 10:02 AM.

Brad Dvorak noted that there was a quorum present.  34 members were in attendance.

The minutes for the 69th Annual Meeting were handed out to all members and reviewed.  Motion to approve by Gay Strunk and seconded by Stacy Elliott.  Motion carried.

Chairperson Ken Owens welcomed everyone in attendance and introduced the Board and Staff:

There was no Old Business.

Ken Owens thanked the Staff for all of their hard work regarding the upcoming system upgrade.  Ken also told all of those in attendance that if they are interested in serving on the board to let a member of the staff know of the interest.

Heather thanked the Board of Directors for the volunteer work they do to help out.  She gave a brief history of how QOCU was started 70 years ago.  She then talked about the upcoming Core Conversion project and about some of the features that will be updated.

Gabe & Sarah from Securian Financial spoke on how markets historically recover from times of crisis.  They also did a brief trivia game with prizes.

Four board members were up for re-election:  Ken Owens, Joe Conner, JoAnn Elliott, and Bridget Anderson.

A motion from Gay Strunk was put forward to elect the nominees by acclamation.  Seconded by Russ Beck.  The motion passed unanimously.

Motion to adjourn by Gary Gruwell and seconded by Berlinda Owens.  Motion Carried.  Adjourned at 10:40 AM.